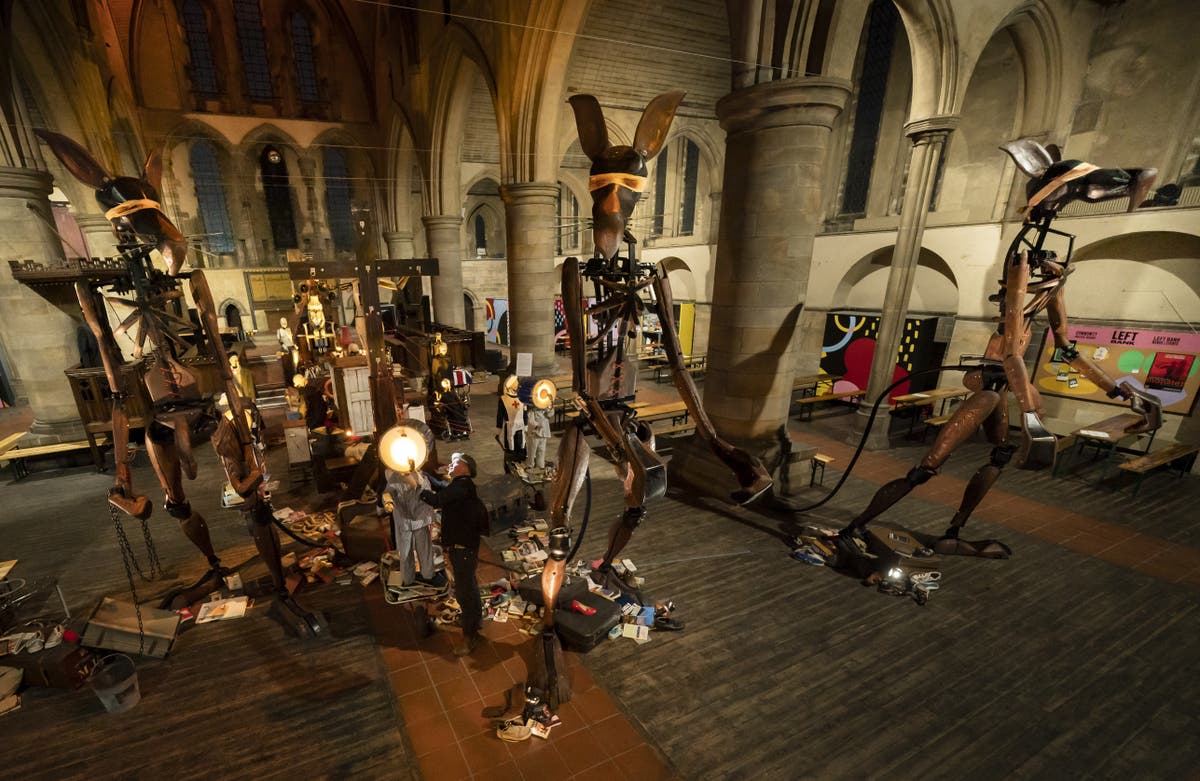 The contemporary art exhibition made from scrap materials depicts “a nation’s insecurities and pain in the midst of a communal nervous breakdown”, its creator has said.

Installation Monster, which is open in Leeds and features high heels, lampshades and prams, took three years to build.

Artist Giles Walker has been creating sculptures for 27 years and has focused this exhibition on issues he feels are particularly important in the UK.

I have these animatronic figures, and they cough up the whole piece. By the time it was first shown, the cough had taken on an entirely different significance.

He said: “The monster started with the idea of ​​producing a piece that took away the insecurities and pain of a nation in the midst of communal panic.”

Mr Walker described how the piece evolved, starting as a vague idea, but ending specifically about Britain: “It evolved into looking at the relationship between the general public and the establishment.

“With the current government exposing itself, this appears to be a good time to show it.”

Monster was first shown in London in 2020 at The Truman Stables, but made its North of England debut in the Left Bank Leeds on Thursday, and will be there until 29 January.

One element of the exhibition is the figure’s dry cough, but “pandemic was never the subject”, Mr Walker said.

However, the monster was first shown during the pandemic and Mr Walker said it took the exhibition in a new direction.

“I made it before the pandemic and assimilated it to poor health,” he said.

“I have these animatronic figures, and they cough all over the piece. By the time it was first shown, the cough had taken on a completely different significance.”

Visitors can walk in and around the sculptures with an accompanying soundtrack by Paul Hartnoll from the electronic duo Orbital.

The soundtrack includes a dialogue about important issues in Britain, including the political landscape and the treatment of refugees.

Mr Walker said: “How a country takes care of its refugees depends on the nation.

“I also sample different interviews, and one is from Prince Andrew, who is now taking on a new life because of a recent court case.

“This piece is political in nature and is intended to provoke, captivate and disturb, and I hope the people of Leeds feel more curious as they come.”

Left Bank is a Grade II listed former church in Leeds Burley. This was intentional, according to the artist.

“It’s the most amazing building, and it ties it into a church because one of the figures is a priest, obviously a part of the church establishment,” Mr Walker said.

“The fact that the church is now being used for community-minded projects rather than worship is really interesting.”

The show takes place after dark and is free to book.

Visitors are encouraged to make donations that go to the refugee community kitchen, which serves food to those fleeing the effects of war, poverty, persecution and climate change.

Mr Walker spoke of the charity’s choice, saying: “I’ve worked with a lot of people in the past, and the background I come from is running it, and I want to support them.”

Sue Jennings, director of Left Bank Leeds, said: “After reopening earlier this year with ‘Paradise’, which was positive and joyous, we felt it was time to show a different string to our bow and performance work. Which is the exact opposite…: haunting, dystopian, and full of horror.”