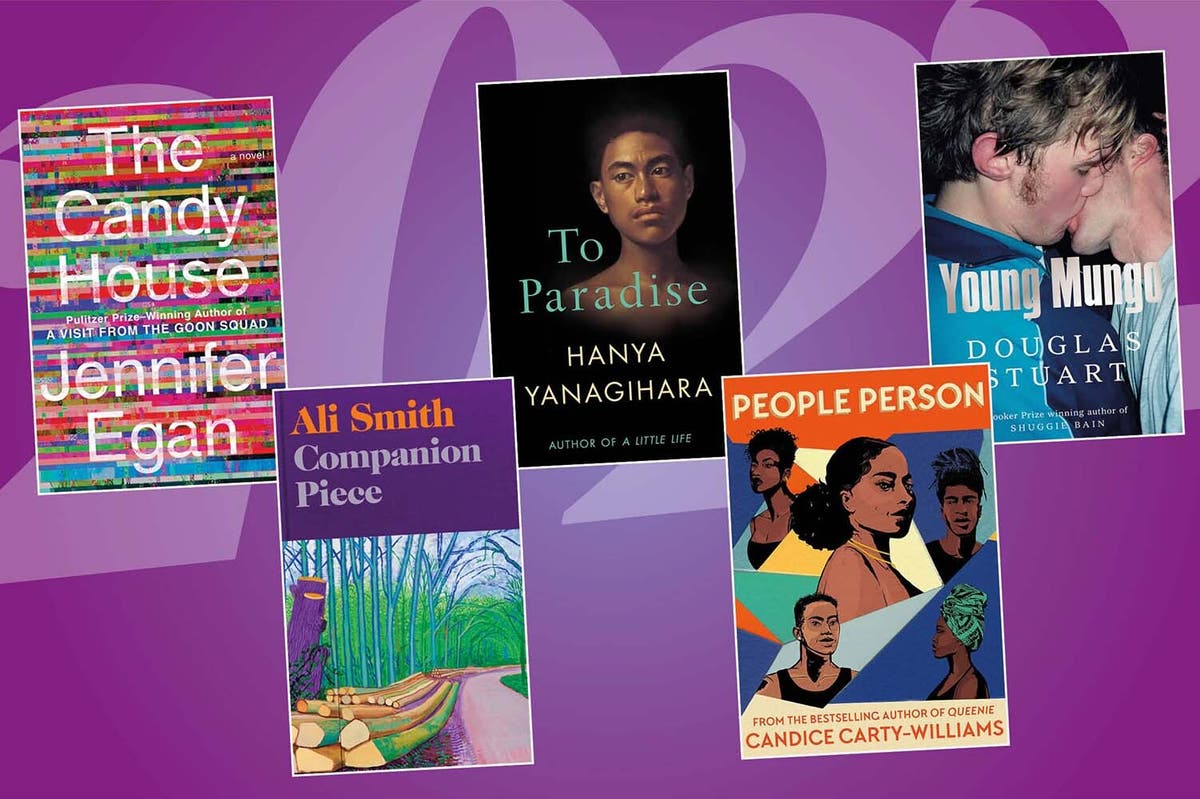 Here we would be without books? We’re reading more novels than ever, as the novels proved to be a relatable escape from the tumult of the past two years.

Happily, the year ahead is filled with new titles from some of our favorite authors, as well as the introduction of new voices.

Want to fatten your fiction reading stack? Here’s our guide to the best novels to read in the coming year.

Hanya Yanagihara. by to heaven

Seven years after her gruesome mega-hit A Little Life, Hanya Yaragihara is back with another chunky door of a novel. Set in an alternate America over three different centuries, To Paradise explores a wealthy family in the late 1800s, the AIDS epidemic of the early ’90s, and an ecologically fragile, totalitarian future. (January 11, Picador)

There is no one better than Tessa Hadley to capture the secret longing of her many amazing characters. Her latest, written in her usual crisp, absorbing prose, depicts a woman’s sexual awakening in 1960s London. (January 20, vintage)

Marion Keys’ novel Rachel Holiday, about a woman who goes to rehab, has sold more than 1.5 million copies since its publication in 1998. Expect a sequel to fly off the shelves, when published this year. Rachel now has a happy and healthy life working as an addiction counselor – but then an old flame pops back into her life and nothing seems so sure. (February 17, Michael Joseph)

The author’s latest novel from We Are All Completely Beside Ourselves is another family saga, but it takes place two centuries ago during the American Civil War. Based on the ill-fated Booth family, one of whom murdered Abraham Lincoln, Fowler brings us a massive historical epic that will leave you stunned. (March 3, The Serpent’s Tail)

Daisy Buchanan’s second novel is all about the relationships we have with our own work. Harry’s thankless gig at a women’s magazine; When she is sidelined, she hires young Kean Bean Imogen. They love their job… but does their job love them back? (March 10, region)

The great Anne Tyler has been writing novels for half a century and, at 80, shows no signs of stopping. His follow-up to the long-listed redhead Booker on the Side of the Road is a portrait of the Garrett family, beginning with summer vacation in 1959 and running to the present day. not to be missed. (March 24, Chatto and Windus)

None of this is serious about Katherine Prasifka. By

A novel by a young Irish woman set in Dublin? The inevitable Sally Rooney comparisons await. But the beginning of Katherine Prasifka, about a group of friends trying to launch themselves into the real world after university, has more in common with the concerns of Patricia Lockwood’s No One Is Talking About This. Delving into the shrinking divide between the online and offline worlds, it explores the all-consuming impact of the Internet on a generation. ,7 April, Canongate)

Ali Smith’s winning seasonal quartet culminated with Summer last year, but it’s a “celebration of adventure” on its heels. Think of it as the B-side of the Seasonal Quartet—more up-to-the-minute observations of our confusing world, more playful language to get lost in. (April 7th, Hamish Hamilton)

Lessons in Chemistry by Bonnie Garmus

Meet Elizabeth Zot, one of the most winning heroines of 2021. She is a scientist-turned-TV cook who is teaching her dog to read and wants to empower housewives with the knowledge of chemistry formulas. Bonnie Garmus’ highly readable debut has already been snapped up by Apple TV for an adaptation, executed by Brie Larson, who will star as Elizabeth. (April 12, Doubleday)

The second novel by Douglas Stuart is a love story between two young men, Mungo and James, on a Glasgow housing estate in the 1990s, before his budding, Booker-winning debut Shuggy Bane was published. Mungo is a Protestant and James is a Catholic, and their love story takes place against a backdrop of sectarian violence as well as rigid notions of masculinity. “It’s also about how men hurt men and can be victims of patriarchy,” Stuart told the Standard. (April 14, Pan Macmillan)

Julian Barnes’ latest novel is billed as “a loving tribute to philosophy.” A student opens the notebook of her old teacher, Elizabeth Finch – a woman with unusual ideas that changed the way her students thought. At 160 pages, it’s another thin book by Barnes, but we know from his Booker-winning Sense of an Ending that the short can still be really cute. (April 14, Jonathan Cape)

She sings, she acts, and now Janelle Monae is turning her hand to writing. The fiction debut of one of our most prolific pop stars will be a collection of Afrofuturistic short stories based on his 2018 album Dirty Computer World. (April 19, Harper Voyager)

One Day I Will Astonish the World by Nina Stibbe

Nina Stibbe’s very funny novels are full of charm, and her latest novels brilliantly capture the poignant humor of British suburban life. From the ’90s to the present day, it follows Susan’s ups and downs from a job in a ranch shop to working at the local university, and her relationship with her husband and best friend. (April 21, Viking)

A major literary phenomenon: Jennifer Egan is returning for one such sequel to the characters in her dazzlingly inventive Pulitzer Prize-winning book A Visit from the Gun Squad, about a tech entrepreneur who created software that will make you remember all your memories. provides access to. (April 28, Little Brown)

The highly anticipated follow-up to Candice Carty-Williams’ smash hit debut Queen will be with us in June. We’ll meet another unforgettable protagonist in Dimple Pennington, a lifestyle influencer whose life revolves around her phone—until a dramatic event brings her absent father and half-siblings back into her life. (April 28, Trapeze)

Her essay collection Notes to Self was extraordinary, so the fact that Irish author Emily Paine has now written a novel is something to be excited about. Two women in Dublin in 2019 – one in an unhappy marriage, the other a teenager – are both trying to work out how to express what they want and need. (May 5, Hamish Hamilton)

Leila Motley Fool’s first true crime novel was bought at a 13-way auction in the US and a 9-way auction in the UK. It is based on the real story of a black woman taking a stand against a police cover-up, based on events in Oakland, California, from where the motel is located. (May 24, Bloomsbury)

There has been a lot of initial praise for the debut, which has been compared to Dodi Smith’s I Capture the Castle. About a young girl who can’t find any of the other girls’ stories in the library, she sets out to make up her own story – until she and her siblings end up on separate paths close to war Go. “This is the kind of book that will be unappreciated and loved for a lifetime,” says author Francis Spaford. (June 2, Fig Tree)

what time is love by Holly Williams

Art journalist Holly Williams’ debut novel is already being compared to David Nichols’ One Day, a book that made us both develop rage against Anne Hathaway. Set in three different decades – the 1940s, 1960s and 1980s – it looks at how a couple’s love story can differ depending on when it happened. (June 22, Orion)

Back Up Man by Phoebe Luckhurst

OK, maybe we’re biased, but we think Phoebe Luckhurst is one of the funniest new novelists out there. Part rom-com, part mystery, the second novel by Standard’s features editor, tells the story of Anya Mackie, who finds herself single, homeless and unemployed after the age of 29. Trapped in a horrific flatshare, she remembers that she and her high school crush had made a pact to marry if they were both still single at age 30 – but it seems to have disappeared from the face of the planet. has gone. Perfect for anyone who’s ever attempted to chase an ex on Facebook (all of us then). (July 7, Michael Joseph)

You Be a Mother by Meg Mason

Meg Mason’s Sorrow and Bliss was a hit in 2021, and undoubtedly one of the best books of the year. It wasn’t her first, though – she was You Be Mother, which was published in Australia in 2017. Now first published in the UK, it follows Abi, who becomes pregnant by an Australian exchange student and later moves to Sydney to begin. A new life with her baby. (August 18, W&N)

Mohsin Hamid’s latest novel begins with this sentence: “One morning Anders, a white man, woke up to find that he had turned a dark and undeniable brown.” The electrical base, borrowed from Kafka’s Metamorphosis, sets out to update a classic to make it immediately relevant. (August 11, Hamish Hamilton)

Ray Lennox returned in second place in Irvine Welsh’s crime series; The first has just been adapted into a series for Britbox. In this case, there’s been a coercive death of a corrupt MP – upsetting so many people, it’s hard for Ray to know where to start when it comes to suspects. If you like your crime dramas Scottish and swearing, this is for you. (August 25, Jonathan Cape)

The unstoppable Richard Osman has forayed into the world of publishing with his casual crime series, Thursday Murder Club. A third is due in September – the next stop is world domination? (September 15, Viking)

Sadly not about a day at Cadbury World, the latest novel by state-of-the-art national expert Jonathan Coe charts a family in the Birmingham suburb of Bourneville from VE Day in 1945 to the coronavirus pandemic. Coe assures readers that there will be mention of chocolate—oh. (November 3, Viking)