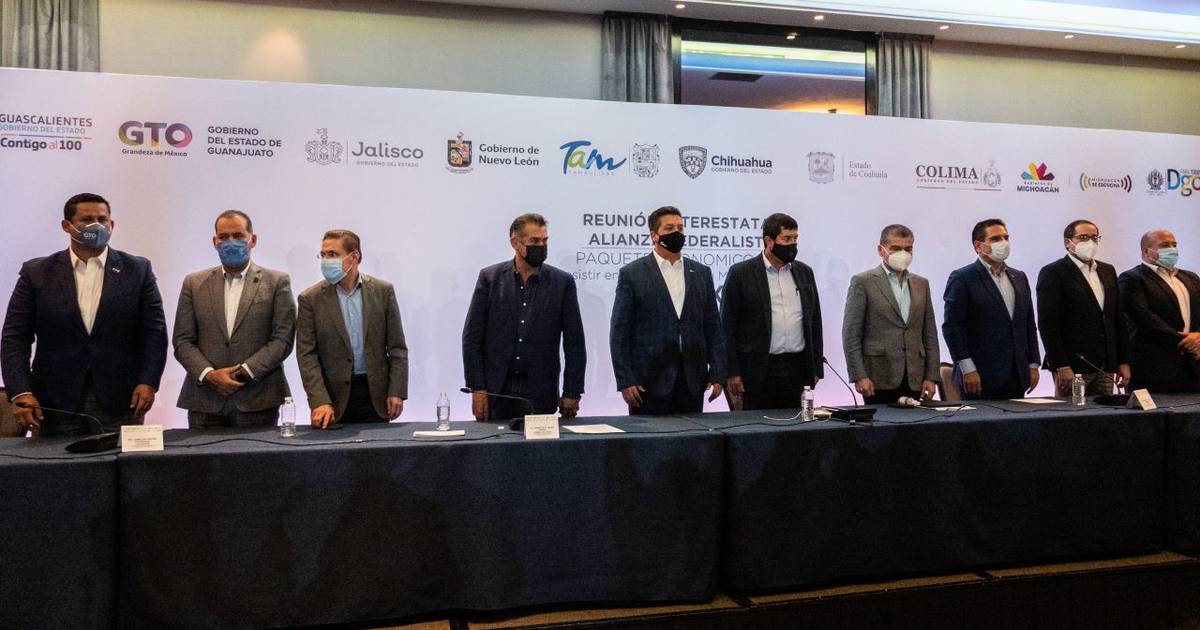 It seems like a long time ago, but no. I am referring to the publication of a photograph that showed a group of governors organizing to confront the federal government. His flag was a defense of federalism: that this form of political organization enshrined in our Constitution should not be crushed. What remains of this federal alliance? Photo. Governors who wanted to model the federal executive are no longer in office or have decided to ‘surrender’ to the same executive. We must change the picture of the rebels and the recent one in which everyone poses smilingly next to the President.

This alliance was interesting; A bit durable too. A person can jump in as president when he has political capital, which is prestigious but also monetary. The rebels have some essential qualities, but no money. The saying of ‘who pays, rules’ was strictly applicable to them.

It seems relevant to put this issue on the table in this year that begins for various reasons. One needs to remember that there are deep flaws in the functioning of our politico-administrative system, and it affects us in almost everything. This is a blind spot in the current administration because the aim is not to create a functional government system, but to establish a scheme for concentration of power that benefits the President. And he’s successfully moving toward his goal, according to the photos I’m referring to: everyone smiling around the Presidential figure. If they were asked to bow before him, they probably would. Thus the degree of subordination.

I am leaving this as a note so that when we have the opportunity to discuss how to form an effective government and act accordingly, we will do it in essence. In other words, when the opportunity opens up to talk about institutionalism and governance, we put the issue of federalism in the first place, and that we have arguments for maintaining and improving it.

But I want to talk about another reason for bringing up this topic now, clearly political. In my case (which of course many others have) there is curiosity and inquisitiveness that can be summed up in the question of whether we will have a competent leadership in creating a substitute for the President of the Republic. Let’s be honest: Many of us wish it existed; That there is not a single character monopolizing our attention and public agenda. The first three years of this administration have been that of the President. Will the next year be his or will he dispute them with someone else?

There were competence members in the Federal Coalition. But when one hears that a tempting prospect of opposition, Javier Corral, negotiates a position with Morena and the president, it remains only to lower one’s head to understand what is happening in our political system. which reduces the ability to create. Good and independent leadership. And it also makes me wonder: What do we need to do to change that? Do we have a problem with genes or is it a matter of the design and promotion of institutions? Addressing this issue is key to transcending our caudilismo chakras. We assumed that they have grown up, but they are alive as before.

Our past explains our present. No one can dispute this. Subjugation and control were part of the basic design of the post-revolutionary political plan. After years of violent fragmentation of power and political strife, finding a way to institutionalize that fragmented power and align it with a set of rules was a feat. And it worked really well for a few years. It is an imprint of our past, but it cannot continue into the future. That’s why the picture of the rebels was shocking: it promised to break away from who we were.

This year is important because the process of succession is open and those who will run for the presidency will have to come out. Then stick out your face. I wonder if any interesting possibilities emerge from that picture of rebel governors. If not from there, where will it come from? I can say that interesting leadership innovation should come from planning. From my point of view, that would be the pivot to catapult potential candidacy. A leadership that thinks outside the box of the post-revolutionary (we must remove the impression that it survives despite alternatives). It supports new and innovative agendas. Who dares to challenge utterly remain so, and don’t pretend that you do like our current president. Let me say this: Lopez Obrador has the best livelihood remain so, So it was the mask, as it is called a book by Luis Rubio, that I invite you to read.

How lazy to look at the humble governors, or those who lose the floor! It will be very interesting to see courageous figures emerging from places other than the traditional ones in 2022. 2022 is the year.

I’m honest I want to see new leadership, and I don’t think they come out of the picture of rebel politicians. There is another mine to explore. Speak now!