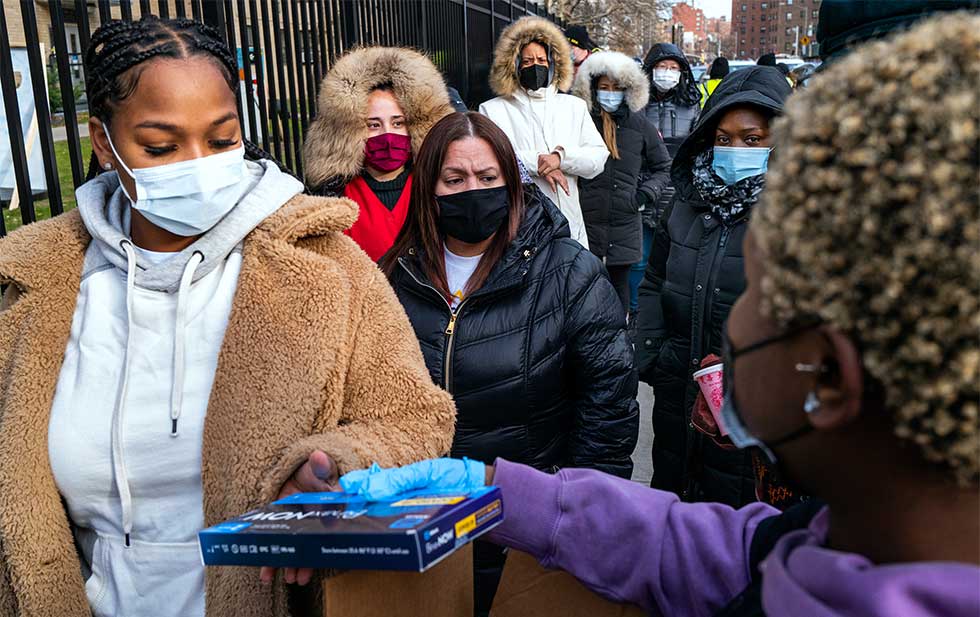 New York.- For two years, the number of coronavirus cases and hospitalizations have been the most commonly used indicators to follow the evolution of the pandemic around the world.

But the Omicron wave has distorted the general statistics and forced the media to rethink how they report these numbers.

The number of infections spiked during Christmas, something that would have been expected given the emergence of a more contagious form than its predecessors.

However, these figures only reflect the cases reported by the health authorities. These do not include most people who are tested at home or do not even know they are infected. Case reporting gets delayed even on holidays and weekends.

If all these numbers can be added up – and it can’t – then it is likely that the number of infected will be much higher.

For this reason, The Associated Press recently advised its editors and journalists to avoid focusing on case numbers in COVID-19 news. This means, for example, not focusing solely on stories breaking daily records of infections in a country or state, as that figure has become unreliable.

In various media, there has been an increased reluctance to use the official count of cases, and instead the average of cases reported over several days is used.

On its “Pandemic Guide” website, the Washington Post used an average of seven days for new cases and compared the figure to last week, which showed a 56% increase in detected infections. The New York Times used daily data in a table, but it also showed a two-week trend in infections and deaths.

An AP article published Saturday by Jennifer Cinco Kelleher and Terry Tang on the impact of Omicron infections on services was filled with data from across the United States, such as hospitalization rates or employee sick leave numbers. The number of cases was not used.

“We definitely wanted people to go ahead and be more specific when reporting,” said Josh Hoffner, a news editor who helps oversee AP’s coverage of the virus.

Some see the hospitalization and death figures as a more credible picture of the current impact of COVID-19 on society. But the usefulness of those numbers has been questioned in recent days. In many cases, hospitalization is accidental: Tanya Lewis, editor-in-chief of health and medicine at Scientific American, said people admitted for other reasons are surprised when they test positive for the coronavirus.

Despite the flaws, infection numbers should also not be overlooked, said Gary Schweitzer, a professor at the University of Minnesota School of Public Health and editor of HealthNewsReview.org, which oversees health coverage in the media.

The data shows trends, giving a picture of which areas are particularly affected or whether a wave may be peaking, he explained. They can predict wider impacts on society, such as where hospitals will be overwhelmed or if there will be a shortage of workers.

“These are stories that cannot be adequately told if only hospitalizations and deaths are highlighted,” Schweitzer said.

This is an argument that is also included in the internal recommendations of Andhra Pradesh.

“They have value,” Hofner said. “We don’t want people to remove the mention of contagion figures.”

Some journalists and public health experts believe that as painful as the current wave is, it may also deliver good news. David Leonhardt and Ashley Wu wrote in the New York Times, this may indicate that COVID-19 is beginning to become an endemic disease that people are learning to live with, not a devastating pandemic.

But if the past two years have taught us anything, Lewis said, it’s the danger in predictions.

“We’ve been surprised over and over again,” he said. “We do not know everything about the course of the pandemic. We still have to be humble and look with an open mind to see where things are going.”