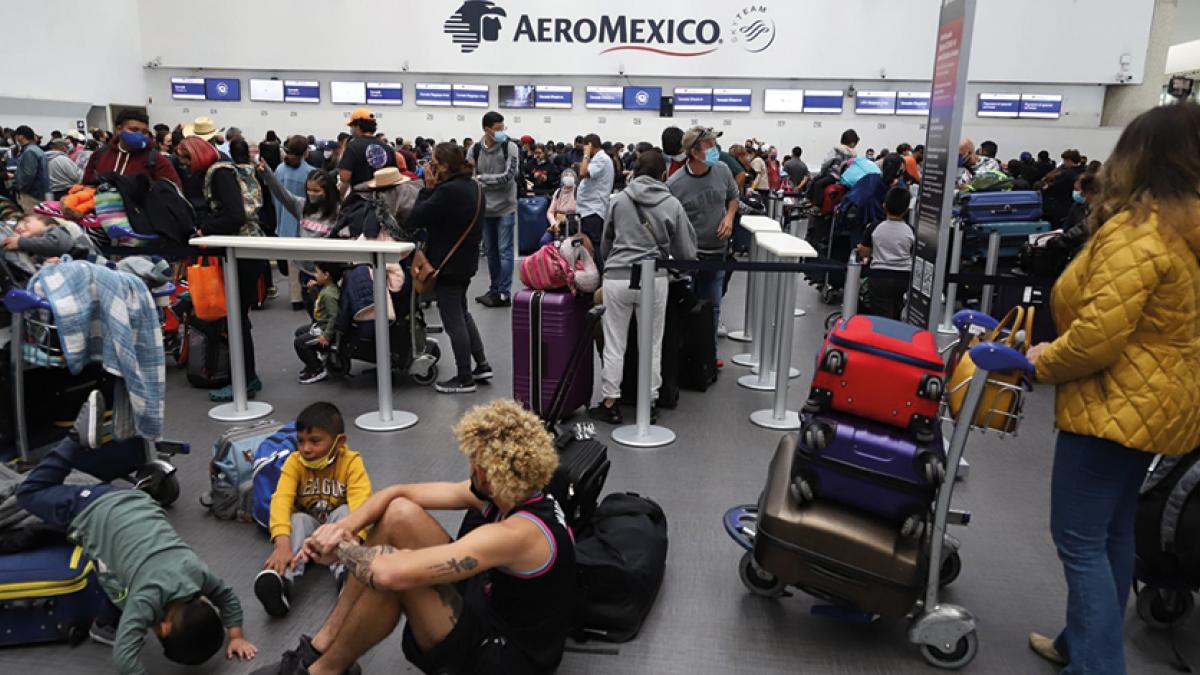 At least 325 flights have been canceled at Mexico City International Airport (AICM) due to a health emergency caused by the Omicron version of COVID-19, which has limited the availability of airline staff.

According to an AICM report yesterday afternoon, there were 203 canceled flights from January 5 to 9, of which 178 were from Aeromexico and the remaining 25 from other airlines: nine from Aeromar, two from Viva Aerobus and one from Volaris.

However, Aeromexico updated its figures last night, saying it canceled 300 flights for the period January 5 to January 10, and if 25 of these were suspended by other airlines, at least 325 trips were suspended. were done.

Aeromexico highlighted that, despite the rate of infection among its crew members, it has implemented protocols that have allowed it to cancel only 300 flights.

He highlighted that the operational adjustments began last Wednesday, January 5; “From January 5 to 10, we have scheduled about 3,100 flights, of which about 9.0 per cent were modified.”

In a statement, the airline specified that all customers with the revised itinerary will be transferred to other flights from the company and from other companies. He indicated that, as of yesterday, seven out of every 10 passengers were able to fly to their destinations.

With regard to health protocols, Aeroméxico said it will continue to follow its rules to guarantee the health of customers and employees.

He highlighted that it conducts 14,000 weekly tests to guarantee that no infected or suspected associates put others at risk; In addition, at all airports where the airline operates, equipment is sanitized before each flight.

The latest official report released by the Mexican Aviation Flight Superchargers Association (ASSA) reports that 140 flight attendants are “down” due to the Covid-19 infection, as well as 56 others who are suspended for lack of valid flight documents. ,

These 196 unionized elements represented 10.38 percent of the plant operating in the previous payroll, which led to the cancellation of flights and impacted operations.

While the Association of Aviators’ Union (ASPA) reported that, as of last Friday, 87 pilots were infected with COVID-19, of which four cases were positive in Aromer, 14 at Aeromexico Connect and 69 at Aeromexico.

However, the trade union association warned in a statement that “it is very likely that these numbers will increase due to the infectious nature of the Micron variant”, for which it undertook to monitor employees.

He said the pilot who tests positive for Covid-19 should isolate himself, but so should the rest of the flight crew until the illness is ruled out or confirmed; “While this reduces the number of pilots, it guarantees operating with a COVID-free staff.”

AICM receives approximately 100,000 users per day, 50,000 in each of the two terminals; However, it is estimated that another 100,000 people arrive at the airport terminal as companions, so the population unnecessarily doubles.

The national traveler is the one who makes the most use of AICM; Till last year there were around 25 million and only 10 million international, reflecting the high demand for flights in the domestic market.

The Federal Consumer Prosecutor’s Office (Profeco) reported that from January 6 to 9 it offered 100 consultations to affected users, 90 of which to Consolidate, two for complaints from residents abroad and eight for cancellation. To do, was told about it.

He specified that AICM had 18 immediate agreements with provider Aeromexico through two modules and provided assistance to consumers to reschedule their flights.