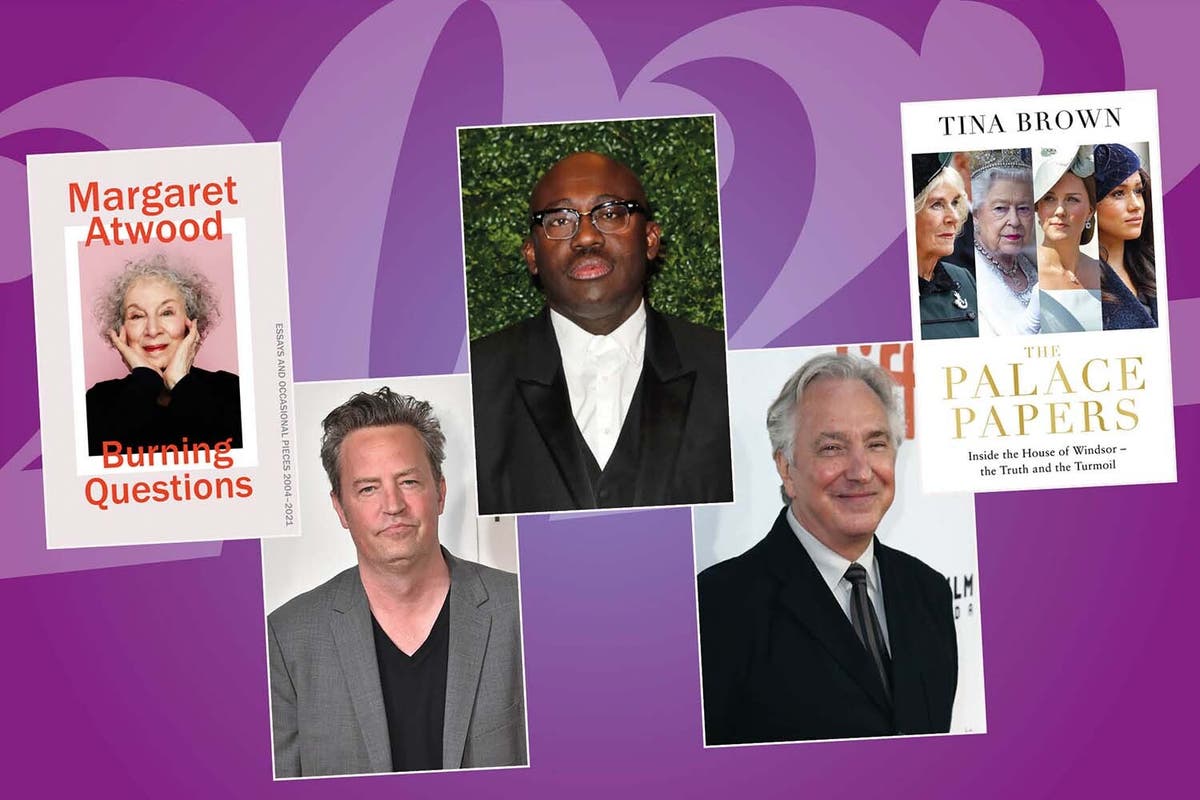 The pause of 2020 seems to have prompted many to reflect on their lives – later, 2022 is the year of the memoir.

Alongside stories of survival, creativity, grief and motherhood, there will be big-name Autobiologs from the likes of Matthew Perry, Edward Enninful, Minnie Driver and Jarvis Cocker.

We can also expect thrilling new books of essays and ideas, as well as books that touch on urgent political issues and recent history. Non-fiction fan? Here’s what you’re reading this year. (If you’re looking for a fiction fix, don’t forget to check out our guide to the best novels coming out in 2022.)

I Came This Way to Meet You: Writing Myself Home by Jami Atenberg

What better way to start the new year than by reading a memoir about getting in touch with your creativity? Whipsmart novelist Jami Atenberg shares how she juggled a writing career while traveling the world, creating what it took to build an artistic life. Prepare to be inspired. (January 13, Serpent’s Tale)

A few days after having her first child, Tanya Shedrick nearly died. She says the experience shook her into the realization that she had been sleeping through life. This hypnotically first memoir, about an adventurous, more risk-taking life, reads like a fable. (January 20, Weidenfeld and Nicholson)

The future of the BBC has been deeply debated this year (and it shows no signs of diminishing), but what about its past? This topical book charts the history of Auntie Beebe, and makes the case for the broadcasting institution to be as much a national treasure as the NHS. (January 27, Profile)

The Burning Questions by Margaret Atwood

This new volume of essays by Margaret Atwood covers the rollercoaster ride of recent history, from the Trump presidency to the climate crisis to the pandemic. It may seem like we’re caught in an onslaught of endless peril, but it’s worth taking a look at one of literature’s most relatable voices and trying to figure it out. (March 1, Chatto and Windus)

Amy Lipprot’s wonderful memoir The Outrun, about her return to her home on Orkney in the middle of her early twenties, was so evocative that it made us feel the wind blowing in our hair. His follow-up to what happened next: Liptrot booked a one-way flight to Berlin and landed in an electric love affair. (March 3, Canongate)

The Shame Machine: Who Profits in the New Age of Humiliation by Kathy O’Neill

What is the connection between shame and power – and is shame being weaponized? In this book, smart thinker Cathy O’Neill addresses the question of whether public shaming is becoming dangerous. (March 22, Alan Lane)

A Line Above the Sky by Helen Morta

The wonderful award-winning poet Helen Mort has written a gorgeous memoir about the great outdoors and the impulse to go to our limits. Exploring her love of climbing and the experiences of early motherhood, she neatly intertwines her story with that of her protagonist, Alison Hargreaves, a record-breaking climber who died at age 30 while descending K2 Was. (March 24, Ebury)

Hannah Gadsby’s show Nanette won the Edinburgh Comedy Award, became a Netflix smash hit and was credited with creating an entirely new genre of comedy. In her first book, she writes about everything that moved her. (March 29, The Atlantic)

When the Dust Sits by Lucy Easthope

Lucy Easthope’s job is to help people rebuild their lives after terrible things happen. As the world’s number one authority on disaster recovery, she has helped in the aftermath of traumatic events ranging from the 7/7 bombings to the Grenfell Tower fire. In her fascinating memoir, which also captures the work she did during the COVID-19 pandemic, she shares her experiences from the frontline. (March 31, Hodder)

A Casual Icon by Norman Scott

Ben Whishaw played Norman Scott in the 2018 highly acclaimed drama A Very English Scandal, which was about his relationship with Jeremy Thorpe (played by Hugh Grant) and Thorpe’s subsequent attempt. Now Scott is speaking his mind with this memoir. (April 7, Hodder)

In Love: A Memoir of Love and Loss by Amy Bloom

In January 2020, novelist Amy Bloom traveled to Switzerland with her husband; They were traveling to the Dignitas clinic so that Brian, who had Alzheimer’s, could end his life. Now Bloom has written about it, in an unbroken memoir about love and death that has been described as “excellent.” (April 7, Grant)

Magazine queen Tina Brown’s book The Diana Chronicles is the only book worth reading on the people’s princess. We’re giddy with excitement she wrote a follow-up about what’s going on with the royals since Diana’s death, from the loss of Princess Margaret, the Queen Mother and Prince Philip to allegations of Prince Andrew’s links to Jeffrey Epstein . Oh, and a little story you may have heard of called Megxit. (April 26, century)

Take Patrick Raiden Keefe’s addictive story and mix it with the stranger-than-fiction stuff from The John Ronson Podcast, and you’ll find Sam Knight’s first book is a must-read. Based on his mesmerizing New Yorker article from the 1960s about a study of people who thought they could predict disasters (launched by the Evening Standard’s science editor, no less), this fate And a spooky, amusing read about the difference between coincidence — and has already been bought by Amazon in a 19-way auction for the screen rights. (May 5, Faber)

All Hail Minnie Driver – One of our most underrated actresses is apparently a brilliant writer too. Her series of essays on growing up, fame, family, motherhood and the “messy business of being alive” will be released in the spring. (May 3, Bonnier)

This Is Not A Mercy Memoir by Abi Morgan

As the acclaimed screenwriter of films such as The Iron Lady and Suffragette, Abi Morgan typically writes about other people’s lives. For her memoir, she is turning the lens back on her, starting with the day she found her husband collapsed on her bathroom floor, and everything that happened after that. (May 12, John Murray)

I Lived Here Once: The Haunted Life of Jean Rice by Miranda Seymour

The elusive novelist Jean Rice went off the radar for decades before gaining significant recognition later in life and enduring poverty, depression, and addiction. This major new biography of the Wide Sargasso Sea author covers uncharted territory, exploring the first 17 years of her life in Dominica, which were a major influence on her work – something that no biography has yet done. (May 12, William Collins)

As home prices continue to rise, generation rent seems to be more locked in than ever before. This major new book by iPaper’s Housing Correspondent Vicky Spratt, with personal accounts of those affected, will put the issue firmly on the agenda. (May 12, Profile)

This incredibly entertaining book by Pulp frontman Jarvis Cocker isn’t so much a memoir as a journey through the things that have made him who he is. He was inspired to write it when he cleaned out his scaffolding and found a trail that informed his creative life. So basically Marie Kondo, but make it Britpop. (May 26, Jonathan Cape)

None of the above: Reflections on Life Beyond the Binary by Travis Praise

Travis Alabanza’s excellent play Overflow, about a trans woman’s siege in a nightclub toilet, was one of the most exciting bits of new theater writing to be staged in the past two years. Now she has written a book about living beyond the gender binary and questioning restrictive social structures. (August 4, Canongate)

Without Warning and Only Sometimes by Kit de Waal

Kit de Waal’s acclaimed debut novel My Name Is Lyon is set to become a major BBC drama in 2022, directed by Bush theater boss Lynette Linton. It will also be the year that de Waal tells its own story: her memoir, about growing up in mixed races in Birmingham in the 1960s and ’70s, hits shelves in the summer. (August 18, Tinderpress)

A Visible Man by Edward Enninful

It’s the year of a must-read memoir—here’s one more to add to the pile. In 2017, Edward Enninful became the first black editor-in-chief of British Vogue; Since taking over, he has redefined the magazine and its champions. Now he’s telling his own story – written with style, as you’d expect. (September 6, Bloomsbury)

Wifedome: The Visionary Writer, The Invisible Wife by Anna Funder

Big Brother is watching you, but the literary world is often not looking at the wives of so-called geniuses, but ignoring them. This groundbreaking new book by Anna Funder, shedding light on the life of 1984 author George’s wife Eileen Orwell—has been described as “a blazing feminist masterpiece.” (September 22, Viking)

Faith, Hope and Carnage by Nick Cave and Sean O’Hagan

Based on more than 40 hours of interviews with journalist Sean O’Hagan, this new book features Nick Cave’s intimate thoughts on life, music, grief, and more. After winning the book in a 10-way auction, Francis Bickmore, the publishing director of Canongate, described it as “the spiritual vitamin shot we all need right now”. (September 22, Canongate)

Much remembered actor Alan Rickman began writing a diary in the early 1990s and continued to do so until his death in 2016. There are 27 volumes in total, covering everything from his work on Sense and Sensibility, to Harry Potter, to his laser—the sharp judgments on the many plays he went to see. They have been collected and edited into a book, which will be published in the autumn. Bound to be a total gem. (Autumn, Canongate)

Get ready for that where Chandler writes his memoir. Matthew Perry, aka Chandler Bing, is the first of the Friends cast to write about his life, and the currently untitled book will arrive in the autumn. Documenting life on one of the most popular sitcoms of all time, as well as her struggles with addiction, it looks like Perry’s book will give Friends fans a lot more insight than the megahyped but distinctly meh 2021 reunion. (autumn, title)

We’re expecting shock waves at the end of the year, when Prince Harry’s memoir is “tentatively scheduled” for publication. The Duke of Sussex is sharing his own account of his life, from childhood to military service, marriage and parenthood. Haza tells us: “I am not writing this as the prince I was born to be, but the man I have become.” (Penguin, late 2022)